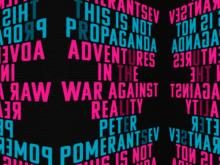 Peter Pomerantsev: This is not Propaganda

Join us for a discussion of Peter Pomerantsev’s book This is not Propaganda: Adventures in the War Against Reality presented by the JHU SNF Agora Institute in the Mason Hall Auditorium. (3101 Wyman Park Drive Baltimore, MD 21218) Register here!

We live in a world of influence operations run amok, where dark ads, psyops, hacks, bots, soft facts, ISIS, Putin, trolls, and Trump seek to shape our very reality. In this surreal atmosphere created to disorient us and undermine our sense of truth, we've lost not only our grip on peace and democracy--but our very notion of what those words even mean.

Peter Pomerantsev takes us to the front lines of the disinformation age, where he meets Twitter revolutionaries and pop-up populists, "behavioral change" salesmen, Jihadi fanboys, Identitarians, truth cops, and many others. Forty years after his dissident parents were pursued by the KGB, Pomerantsev finds the Kremlin re-emerging as a great propaganda power. His research takes him back to Russia--but the answers he finds there are not what he expected.

Blending reportage, family history, and intellectual adventure, This Is Not Propaganda explores how we can reimagine our politics and ourselves when reality seems to be coming apart.

Peter Pomerantsev is a Visiting Senior Fellow at the Institute of Global Affairs at the London School of Economics, an author and TV producer. He studies propaganda and media development, and has testified on the challenges of information war to the US House Foreign Affairs Committee, US Senate Foreign Relations Committee and the UK Parliament Defense Select Committee. He writes for publications including Granta, The Atlantic, Financial Times, London Review of Books, Politico and many others. His first book, Nothing is True and Everything is Possible, won the 2016 Royal Society of Literature Ondaatje Prize, was nominated for the Samuel Johnson, Guardian First Book, Pushkin House and Gordon Burns Prizes. It is translated into over a dozen languages.