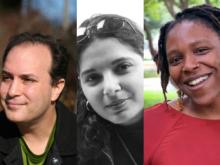 Andrew Hiller attempted to travel the road least travelled only to fall off a bridge or two. Caught in wild currents, he surfaced to find his commentaries selected four times as best of the year on Washington’s NPR station WAMU 88.5 FM, a pair of his plays fill the stages of New York City, and emerge with Jim Henson gang. In 2019, he was selected as the Baltimore Faerie Faire’s Author of the Year. His fiction has been published by Amazing Stories, Daily Swan, Dreampunk, and elsewhere. His first fantasy novel, A Climbing Stock, grew to be an Amazon humor best seller. His second, A Halo of Mushrooms, was described by Dr. Who’s Mark Wheatley as “… exactly what good fantasy should be (and almost never is) original, rich with wit, and ideas while managing to comment on life in general.” When not writing, editing, or producing you can often find him in front of a canvas. A sampling of his radio, visual and literary work can be found at www.andrewhiller.net

Day Al-Mohamed is an author, filmmaker, and disability policy executive. She is co-author of the Young Adult novel, “Baba Ali and the Clockwork Djinn,” is a host on Idobi Radio’s Geek Girl Riot with an audience of more than 80,000 listeners, and her most recent novella, “The Labyrinth’s Archivist,” was published July 2019. Her recent publications are available in Daily Science Fiction, Apex, Crossed Genres anthology “Oomph – A Little Super Goes a Long Way,” and GrayHaven Comics’ anti-bullying issue “You Are Not Alone.”  She is an active member of Women in Film and Video and a graduate of the VONA/Voices Writing Workshop.  However, she is most proud of being invited to teach a workshop on storytelling at the White House in February 2016.

Natasha D. Lane is a friend of most things caffeinated, a lover of books, and a writing warrior to her core. As a believer that “the pen is mightier than the sword,” she graduated from Juniata College in 2015 with hopes to become a journalist. Instead, life took her on a different path and Natasha found herself digging up a manuscript from her childhood. This dusty stack of papers would become The Pariah Child & the Ever-Giving Stone. With one book under her belt, Natasha went on to release The Woman In the Tree: The True Story of Camelot, The Pariah Child: Sarafina's Return, and her upcoming work The Pariah Child: Serwa’s Descendants.