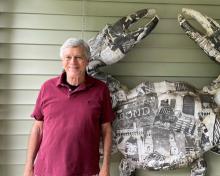 Evans Paull: Stop the Road (In Conversation with Joe McNeely)

Evans Paull's new book Stop the Road: Stories from the Trenches of Baltimore's Road Wars, has been one of our bestselling books on Baltimore history since its release in September, and we're delighted to present an evening with Paull at our sibling shop, Bird in Hand! Joe McNeely will join Evans Paull in conversation.

For fans of Antero Pietila and Lawrence Brown, Stop the Road is an up-close-and-personal account of Baltimore's 40-year battle over expressway plans. Meet the unsung heroes, a ragtag band of neighborhood activists, preservationists, and environmentalists who saved Baltimore from its own leadership, thereby protecting Baltimore's historic waterfront communities of Federal Hill, Fell's Point, and Canton. But that glorious and unlikely win must be tempered with the equally compelling but inglorious story behind the disastrous Highway to Nowhere. This is Baltimore unmasked and laid threadbare for the most momentous decisions since the building of the B&O Railroad.

Evans Paull spent 45 years as a city planner, working both in Baltimore and nationally on urban redevelopment issues.

He began his career in the Baltimore City Department of Planning as a generalist planner before specializing in the redevelopment of brownfields (vacant former industrial or commercial properties, the reuse of which is complicated by contamination).

After starting and managing Baltimore’s Brownfields Initiative, he tackled these same issues at a national level, working first for Northeast-Midwest Institute before becoming director of the National Brownfields Coalition and finally running his consulting business, Redevelopment Economics. Many of his published articles, papers, and presentations still appear on the Redevelopment Economics website.

Paull is now retired. He resides in northwest Baltimore with his wife, Rosemarie. The couple has three children and one grandchild.

Joe McNeely was the first director of Southeast Community Organization (SECO) and active with Southeast Council Against the Road (SCAR). In other walks of life he was a national expert on community organizing—he started and ran the Development Training Institute, which columnist Neal Peirce called “the country’s premier trainer of CDC leaders. More recently, he was the organizer and the first executive director of the Central Baltimore Partnership.