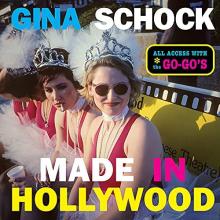 The Go-Go's Gina Schock: Made in Hollywood (in conversation with James Magruder)

Join our sibling shop, Bird in Hand, in welcoming home Gina Schock, drummer of the Go-Go's, to her hometown of Baltimore! We'll be celebrating her new book Made in Hollywood, with James Magruder, playwright behind the musical "Head Over Heels," which features the Go-Go's music.

Gina Schock has been playing in rock bands since the age of thirteen, and she's been the drummer of the Go-Go’s for over four decades. In addition to her work as a drummer, guitarist, and producer, Gina has co-written songs for Miley Cyrus and Selena Gomez. She has also co-written songs with Alanis Morissette and Carnie and Wendy Wilson of Wilson Phillips.

James Magruder is a fiction writer, playwright, and translator. His most recent work for the stage is Head Over Heels, the blank verse mash-up of Sir Philip Sidney’s Arcadia and the song catalog of the Go-Go’s (Broadway, 2018). His adaptations and translations of Dickens, Marivaux, Molière, Gozzi, Lesage, Labiche, Giraudoux, and Hoffmanstal have been staged at Baltimore Center Stage, across America, and in Japan and Germany.. His Three French Comedies (Yale University Press) was named an “Outstanding Literary Translation” by the American Literary Translators Association (ALTA).

He has published four books of fiction: the Lammy-nominated Sugarless (2009); the linked story collection Let Me See It, (2014); Love Slaves of Helen Hadley Hall (2016; and the linked novella collection Vamp Until Ready (2021). Recent work has appeared in StoryQuarterly, Hopkins Review, Prairie Schooner, and Idaho Review. On deck is a commissioned chronicle of the first fifty years of the Yale Repertory Theatre, titled The Play’s the Thing.

He is a five-time fellow of the MacDowell Colony and a six-time recipient of an Individual Artist Award from the Maryland State Arts Council. He holds degrees in French literature from Cornell and Yale and a DFA from the Yale School of Drama, where he taught translation and adaptation for thirteen years.