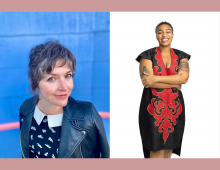 The Ivy is delighted to present an afternoon with Katie Moulton and Hafizah Augustus Geter, two writers whose recent memoirs find their own paths through questions of origin, home, and carving spaces for ourselves into the future. We'll gather on the back patio for some refreshments and a conversation and Q&A, to propel us through the wide ranges of experience in crafting Moulton's audio memoir and Geter's first work of prose since her poetry collection, Un-American. We hope you'll join us!

Dead Dad Club is the lucid, prismatic memoir of Katie Moulton, a millennial music critic who grew up in a die-hard rock-and-roll family, about her father’s unexpected death from addiction shortly before her 17th birthday, and the music obsession she inherited from him that shaped her early adulthood. A quintessentially American tale about family, grief, identity, and dependency, set in the Midwest and scored in the writer’s imagination by the timeless Tom Petty and the Heartbreakers.

In The Black Period, an acclaimed poet reclaims her origin story as the queer daughter of a Muslim Nigerian immigrant and a Black American visual artist in this groundbreaking memoir, combining lyrical prose, biting criticism, and haunting visuals.

A unique combination of gripping memoir and Afrofuturist thought, in The Black Period, Hafizah manages to sidestep shame, confront disability, embrace forgiveness, and emerge from the erasures America imposes to exist proudly and unabashedly as herself.

Katie Moulton is a writer, editor, and music critic from St. Louis. Her audio memoir, Dead Dad Club: On Grief & Tom Petty, was released by Audible in June 2022. Her writing has appeared in The Believer, New England Review, Salon, Oxford American, the Village Voice, and elsewhere. A 2021 MacDowell fellow, her work has been supported by fellowships from Bread Loaf, the Mid Atlantic Arts Foundation, Tin House, Art Omi, and other organizations. She's worked as a journalist for alt-weekly newspapers, a radio DJ, a venue manager, and now teaches at Goucher College and Johns Hopkins University. She lives in Baltimore with her sweetheart.

Hafizah Augustus Geter is a Nigerian American writer, poet, and literary agent born in Zaria, Nigeria, and raised in Akron, Ohio, and Columbia, South Carolina. She is the author of the poetry collection Un-American, an NAACP Image Award and PEN Open Book Award finalist. Her writing has appeared in The New Yorker, Bomb, The Believer, The Paris Review, among many others. Her memoir, The Black Period: On Personhood, Race, and Origin, is out now from Random House. She lives in Brooklyn, NY.