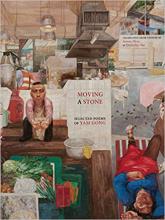 This event will be moderated by Baltimore-based poet Don Berger.

James Shea is the author of two poetry collections, The Lost Novel and Star in the Eye, both from Fence Books. Recipient of grants from the Fulbright U.S. Scholar Program, Hong Kong Arts Development Council, and National Endowment for the Arts, he is the director of the Creative and Professional Writing Program at Hong Kong Baptist University.

Dorothy Tse is a Hong Kong fiction writer whose books include Owlish and So Black. Tse has received the Hong Kong Book Prize, Unitas New Fiction Writers’ Award (Taiwan), and the Hong Kong Award for Creative Writing in Chinese. She has been a resident at Art Omi, the University of Iowa’s International Writing Program, and the Vermont Studio Center.

Donald Berger grew up in New York and Massachusetts, and attended the University of Massachusetts and the University of Washington.  He is the author of The Long Time, a bilingual edition in English and German (Wallstein Press, Goettingen,Germany),  Quality Hill (Lost Roads Publishers) and The Cream-Filled Muse (Fledermaus Press).  His poems and prose have appeared in The New Republic, Slate, Conjunctions, New American Writing, Colorado Review, Fence, Ironwood, The Iowa Review, The Massachusetts Review, and other magazines including some from Berlin, Leipzig, Budapest, Hong Kong and mainland China  He has taught at the University of Maryland and Montgomery College and currently teaches in the University Writing Program at Johns Hopkins University.