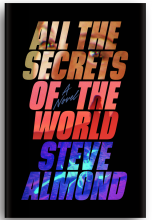 The Ivy is delighted to present an evening with Steve Almond, featuring his long-awaited debut novel All the Secrets of the World. Joining Steve in conversation will be award-winning author Ron Tanner. This event will take place outdoors, in person on The Ivy's back patio.

Click here to preorder All the Secrets of the World!

Steve Almond is the author of eleven books of fiction and nonfiction, including the New York Times bestsellers Candyfreak and Against Football. His essays and reviews have been published in venues ranging from the New York Times Magazine to Ploughshares to Poets & Writers, and his short fiction has appeared in Best American Short Stories, The Pushcart Prize, Best American Mysteries, and Best American Erotica. Almond is the recipient of grants from the Massachusetts Cultural Council and the National Endowment for the Arts. He cohosted the Dear Sugars podcast with his pal Cheryl Strayed for four years, and teaches Creative Writing at the Neiman Fellowship at Harvard and Wesleyan. He lives in Arlington, Massachusetts, with his family and his anxiety.

Ron Tanner’s writing has been named “notable” in both Best American Essays and Best American Short Stories. His awards for fiction include the G.S. Sharat Chandra Prize, the Jack Dyer Prize, the Charles Angoff Prize, the Faulkner Society gold medal, Pushcart Prize, New Letters Award, and many others, as well as fellowships from the Michener/Copernicus Society, Sewanee Writers Conference, and the National Park Service, to name a few. His novel Missile Paradise was named a “notable book of 2017” by the American Library Association. His most recent book, Far West, a story collection, won the Elixir Press book prize in 2020. He lives on an historic farm in Maryland and directs the Good Contrivance Farm Writer’s Retreat, an educational nonprofit.