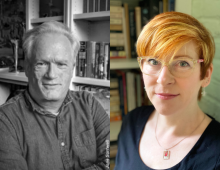 James Magruder and Kathy Flann on the Patio

The Ivy is thrilled to welcome James Magruder and Kathy Flann to read from their new books on our back patio!

The network of protagonists in Vamp Until Ready. Cary Dunkler, Isa Vass, Kristy Schroyer, Judy Gabelson, and Mark Shinner have lives that are transformed in surprising ways by working on or backstage at the Hangar Theatre, a summer stock outfit in upstate New York in the 1980’s. They make—and remake—their families in this closely observed, ultimately comic valentine to the Socialist-leaning hamlet of Ithaca and to the pleasures of putting on a show at warp speed in hot weather.

James Magruder’s fiction has appeared in The Gettysburg Review, New England Review, StoryQuarterly, The Idaho Review, Subtropics, Arts & Letters, Third Coast, Prairie Schooner, Bloom, The Normal School, The Hopkins Review, Gargoyle, New Stories from the Midwest, and elsewhere. He is the author of three books of fiction: Sugarless (2009), a finalist for a Lambda Literary Award; the linked story collection, Let Me See It (2014); and a second novel, Love Slaves of Helen Hadley Hall (2016).

Recent work for the stage includes co-authorship of the book for Head Over Heels, the Broadway musical mash-up of Philip Sidney’s Arcadia and the song catalog of the Go-Go’s. His translations and adaptations of comic works by Dickens, Marivaux, Labiche, Lesage, Dancourt, Molière, Gozzi, and Hofmannsthal have been produced on and off Broadway, across the country, and in Japan and Germany.

He is a five-time fellow of MacDowell and a six-time recipient of an Individual Artist Award from the Maryland State Arts Council. He has made Baltimore his home for thirty years.

K.E. Flann’s prose has appeared in McSweeney’s, The North American Review, The Gettysburg Review, Michigan Quarterly Review, Shenandoah, and others. In addition to How to Survive a Human Attack, a guide for movie monsters from Running Press/Hachette, published books include Write On: Secrets to Crafting Better Stories, from Stay Thirsty Publishing, and two award-winning short story collections, Get a Grip and Smoky Ordinary.

The past millennia or so has seen not only an uptick in human attacks, but also increasingly indiscriminate victim selection. It is understandable to feel overwhelmed. How to Survive a Human Attack provides critical information at a critical time with chapters specifically tailored to their target audience, including:

·  A Zombie’s Guide to Filling the Emptiness and Moving Forward

·  What’s Happening to My Body?: Radioactive Mutants and the Safety of the Nuclear Family