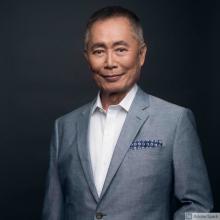 Free registration to attend, or purchase one of George Takei's books from the Ivy Bookshop at registration. Signed books will be distributed upon check-in at the event. There will be no in-person book sales.

Due to social distancing, seating is first come, first serve. No holding seats is allowed. Doors will open at 6pm. No registration is required to watch the event virtually on Facebook Live or YouTube, though encouraged to receive Eventbrite reminders.

George Takei will be in conversation about his life and work. The program is presented as part of the Maryland Libraries Together series.

George Takei is known around the world for his founding role as Hikaru Sulu, helmsman of the Starship Enterprise, in the acclaimed television series Star Trek. But Takei's story goes where few stories have gone before. From a childhood spent with his family wrongfully imprisoned in Japanese American internment camps during World War II, to becoming one of the country's leading figures in the fight for social justice, LGBTQ rights, and marriage equality, Mashable named Takei the #1 most-influential person on Facebook, with 10.4 million likes and 2.8 million followers on Twitter.