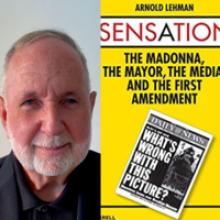 Writers LIVE! Arnold Lehman, Sensation: The Madonna, The Mayor, The Media, and the First Amendment

Arnold Lehman will be in conversation with Tom Hall about the critical issues raised in his new book, Sensation: The Madonna, The Mayor, The Media, and the First Amendment.

Death and bomb threats over an art exhibition! A major battle with the mayor of New York City and the New York Times! Looking back, Arnold Lehman, director of the Brooklyn Museum, and his colleagues were not prepared for what was to happen. No one could have anticipated that SENSATION: Young British Artists from the Saatchi Collection would become the biggest art story in the history of art history. The intense controversy swept the exhibition, the museum, and Chris Ofili’s The Holy Virgin Mary painting to international attention for six months. While 175,000 people saw the exhibition and millions read and heard about it daily, they never knew of the threats and challenges that kept the museum staff awake at night. Mayor Rudy Giuliani, who never saw the painting, focused his rage at The Holy Virgin Mary; rescinded the museum’s municipal funding to force it to close the exhibition; and attempted to evict it from its hundred-year-old landmark. The city’s most conservative media and ultra-religious groups inflamed the conflict  about the right to freedom of expression.

Artist Chuck Close’s comment on the book was “Looking back at one of the most important contemporary exhibitions ever, Lehman’s book is filled with the excitement and anxiety of the moment. I know, I was there.”

Arnold Lehman is past Director of the Baltimore Museum of Art, Director Emeritus of the Brooklyn Museum, and currently Senior Advisor at Phillips, the international auction house for modern and contemporary art.

Tom Hall is the host of WYPR’s Midday, which won the prestigious Edward R. Murrow Regional Award in 2020 for distinguished journalism.

Order your copy of Sensation from us here!