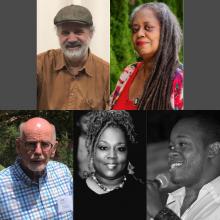 An Evening with the Voices of Woodlawn

Sylvia Dianne Beverly is an internationally acclaimed poet, presenting poetry in London, England, at the Lewisham Theatre. A collection of her work is housed at George Washington University's Gelman Library. She is a member of A Splendid Wake, Gelman Library, George Washington University. Also, she has been featured at the Smithsonian National Museum of History, the Smithsonian National Museum of African Art, the Smithsonian Hirshhorn Museum, and other Smithsonians. Ladi Di as she is affectionally called is a founding member of the poetry ensemble "Collective Voices." She is a proud member of Writers on the Green Line, Poetry X Hunger, Poetry Poster Project, and Voices of Woodlawn. Ladi Di celebrated the 40th anniversary of host Grace Cavalieri, reading on her show, The Poet and the Poem, at the Library of Congress. Also, she is a founding member of the Anointed PENS (Poets Empowered to Nurture Souls) Poetry Ministry, out of Ebenezer AME Church, an alum of Poet-In-Progress with Poet Laureate of the District of Columbia, the late Dolores Kendrick.  She is author of two books (Forever In Your Eyes and Cooking Up South), both on Amazon. Recently her poetry appears in several international anthologies, the Moonstone Press Anthology, and as part of Mike Maggio's 30 for 30 series for National Poetry Month 2021. Ladi Di is also called "Love Poet." The late Dr. Maya Angelou is her hero. She is the proud matriarch of her family. Celebrating Black History 2018, she and her family received posthumously for her Dad a Congressional Gold Medal from the United States Marines. She is a Poet of Excellence in Prince Georges County 2020. Poetry is her passion. Contact her at syladydi@comcast.net or on Facebook.

Patrick Washington has spent over two decades performing, conducting interactive workshops, and spreading love for the spoken, the written, and the rhythmic word across this country. His engaging styles have taken him across the country and back, from Washington's storied U Street circuit, to television and off-Broadway theater performances. Patrick was commissioned to create a poem dedicating the monument to Rev. Dr. Martin Luther King which he performed at the unveiling on the National Mall on October 16th, 2011.  A teaching artist at heart, he has launched his own arts education company, Dialect of Prince George's, and with it created the Youth Poet Laureate program, giving young people the opportunity to collaborate with city officials and serve as poetic ambassadors for their community.

Diane Wilbon Parks is a visual poet and artist;  she has written two poetry collections and a children’s book. Diane is the founder of The Write Blend, a culturally diverse poetry circle, and was recognized as a 2020 Prince George’s County Poet of Excellence. She celebrated the permanent installation of one of her poems and artwork as a permanent sign at the Patuxent Research Refuge - North Tract. Diane’s poetry has been widely featured and highlighted throughout the DMV through the Poetry Poster Project which was exhibited throughout Maryland and at the House of Delegates in Annapolis. Diane has been a long-standing literary advocate and leader in the poetry community.  Her poetry has been featured in newsletters, online magazines, and anthologies, and recently included in the international anthology Singing in the Dark and international magazine Wexford Women;  locally in the Annapolis Westfield Magazine.  Her interviews are included in the 43rd and 44th anniversaries of Grace Cavalieri’s The Poet and the Poem at the Library of Congress. Diane is a USAF Veteran and Senior IT Program Manager. She resides in Maryland with husband, two children, and dog, Cooper.

Hiram Larew’s next collection of poems will be published by Atmosphere Press. He has organized the Poetry Poster Project, Poetry X Hunger, and Voices of Woodlawn. He lives in Churchton, MD.

Clifford Bernier is the author of three poetry collections; he has been nominated for two Pushcart Prizes and his The Silent Art won the 2010 Gival Press Poetry Award. He appears on harmonica in the Accumulated Dust world music series and is featured on the EP Post-Columbian America. A member of the Washington Writers Collection, he has featured on NPR’s The Poet and the Poem from the Library of Congress and lives in Northern Virginia.

This event is part of Summer Break Baltimore, a fun, free program for all ages that encourages literacy and learning in our community.