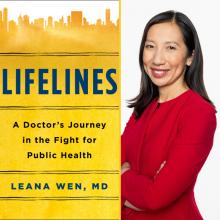 Dr. Leana Wen will be in conversation with Tom Hall about her work and newest book, Lifelines: A Doctor's Journey in the Fight for Public Health.

Wen also tells her own uniquely American story: an immigrant from China, she and her family received food stamps and were at times homeless despite her parents working multiple jobs. That child went on to attend college at thirteen, become a Rhodes scholar, and turn to public health as the way to make a difference in the country that had offered her such possibilities.

Ultimately, she insists, it is public health that ensures citizens are not robbed of decades of life, and that where children live does not determine whether they live.

Tom Hall is the host of Midday, the award-winning, highly rated news and public policy program that features interviews with elected officials, community leaders, thought provoking authors, artists, researchers, journalists, and scholars from around the world.

Tom has won awards from the Maryland Chapter of the Society of Professional Journalists; he has been named "Best Local Radio Personality" and "Best Talk Show Host" by the Baltimore City Paper and Baltimore Magazine, and in 2020, he and the Midday team won a Regional Edward R. Murrow Award, one of journalism’s most prestigious honors.  @tomhallWYPR

This event is part of Summer Break Baltimore, a fun, free program for all ages that encourages literacy and learning in our community.