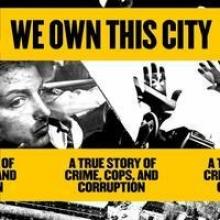 Writers LIVE! Justin Fenton, We Own This City

Justin Fenton will be in conversation about his book, We Own This City: A True Story of Crime, Cops, and Corruption.

In this urgent book, award-winning investigative journalist Justin Fenton distills hundreds of interviews, thousands of court documents, and countless hours of video footage to present the definitive account of the entire scandal of the Gun Trace Task Force. The result is an astounding, riveting feat of reportage about a rogue police unit, the city they held hostage, and the ongoing struggle between American law enforcement and the communities they are charged to serve.

Justin Fenton has been a reporter at the Baltimore Sun since 2005, covering crime and the justice system for the past 13 years. He was part of the Pulitzer-finalist team that covered the death of Freddie Gray and was twice named a finalist for the Livingston Award for Young Journalists, for his coverage of rapes that were being discounted by police and a series inside a homicide investigation. "We Own This City" is his first book, and is the basis for a forthcoming HBO miniseries. He is a graduate of the University of Maryland.