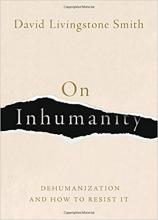 David Livingstone Smith: On Inhumanity: Dehumanization and How to Resist It (in conversation with Mark Moffett)

The Ivy is pleased to welcome David Livingstone Smith for a reading from his new book, On Inhumanity: Dehumanization and How to Resist It. David will be joined in conversation by Mark Moffett. This event will take place on Zoom.

Click here to view a recording of this event!

The Rwandan genocide, the Holocaust, the lynching of African Americans, the colonial slave trade: these are horrific episodes of mass violence spawned from racism and hatred. We like to think that we could never see such evils again--that we would stand up and fight. But something deep in the human psyche--deeper than prejudice itself--leads people to persecute the other: dehumanization, or the human propensity to think of others as less than human. An award-winning author and philosopher, Smith takes an unflinching look at the mechanisms of the mind that encourage us to see someone as less than human. There is something peculiar and horrifying in human psychology that makes us vulnerable to thinking of whole groups of people as subhuman creatures. When governments or other groups stand to gain by exploiting this innate propensity, and know just how to manipulate words and images to trigger it, there is no limit to the violence and hatred that can result. Drawing on numerous historical and contemporary cases and recent psychological research, On Inhumanity is the first accessible guide to the phenomenon of dehumanization. Smith walks readers through the psychology of dehumanization, revealing its underlying role in both notorious and lesser-known episodes of violence from history and current events. In particular, he considers the uncomfortable kinship between racism and dehumanization, where beliefs involving race are so often precursors to dehumanization and the horrors that flow from it. On Inhumanity is bracing and vital reading in a world lurching towards authoritarian political regimes, resurgent white nationalism, refugee crises that breed nativist hostility, and fast-spreading racist rhetoric. The book will open your eyes to the pervasive dangers of dehumanization and the prejudices that can too easily take root within us, and resist them before they spread into the wider world.

David Livingstone Smith is Professor of Philosophy at the University of New England in Biddeford, Maine. He has written or edited nine books, including Less Than Human: Why We Demean, Enslave and Exterminate Others (St. Martin's Press, 2011), which won the 2012 Anisfield-Wolf award for nonfiction. His work has been translated into seven languages. David is an interdisciplinary scholar, whose publications are cited not only by other philosophers, but also by historians, legal scholars, psychologists, and anthropologists. He has been featured in several prime-time television documentaries, is often interviewed and cited in the national and international media, and was a guest at the 2012 G20 economic summit, where he spoke about dehumanization and mass violence.

Mark W. Moffett is a biologist who has done research and exploration in over 100 countries on social behavior in different animals, and in the course of that work has lived with a variety of tribal and hunter-gatherer societies. These experiences motivated him to write his fourth book, The Human Swarm: How Our Societies Arise, Thrive, and Fall (Basic Books, 2019), in which he looks at societies across species and in humans right up to the present day. A fascinating treatment of the biology, psychology, anthropology, and sociology of societies, from nations to chimpanzee communities and ant colonies, The Human Swarm has been called “a book of wonders” by the New Statesmen. It represents Moffett's contribution to what his mentor, the Harvard environmentalist and sociobiologist Edward O. Wilson, has called consilience, the effort to unify knowledge.