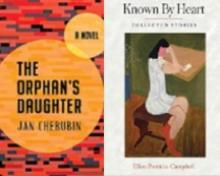 Click here to view a recording of this event!

The Orphan’s Daughter is a novel about a woman who grows up in the shadow of her charismatic but troubled father, a man shaped by his boyhood in a Depression-era Jewish orphanage. The two life stories are woven together to form the fabric of this funny and suspenseful work of literary fiction. Clyde Aronson survives the cruelties of the seemingly bucolic orphanage but is left scarred. Brilliant and self-destructive, a popular high-school teacher and a callous womanizer, he yearns for a son to replace the relationship lost when his father abandoned him. Instead, he fathers two daughters. He resents most the one who most resembles him: the younger, Joanna. Joanna Aronson is thirty, alienated and living in Southern California when she learns of her father’s puzzling illness. She returns home to Baltimore to help care for him. In the process, the two reconcile; Joanna struggles to come to terms with her own difficult history. Clyde promises to leave Joanna his collected papers, including a secret manuscript written long ago about life in the orphanage. After Clyde’s death, Joanna’s stepmother inherits the house and all of his possessions. She refuses Joanna any access. Determined, Joanna breaks into the house and steals the manuscript. The stepmother presses charges. Though fictional, The Orphan’s Daughter is based upon the time, from 1924 to 1934, the author’s father spent in the Hebrew National Orphan Home in Yonkers, New York. This evocative novel incorporates a strong female voice, contemporary feminist themes, Jewish cultural history, and a nostalgic sense of place. By turns wrenching and delightfully humorous, The Orphan’s Daughter is a deft melding of history and psychological drama, a literary page-turner you won’t want to put down.

In Known By Heart, love is necessary but not easy in these stories of love's joys and challenges, regrets and uncertainties. Complicated people fall in and out of love, care for each other, delight each other, disappoint each other, hurt each other, yearn for each other. Campbell tells of all sorts of love: young love, lost love, love found perhaps too late, family love, love between friends. Her writing has been praised for its realism and grace. These untraditional love stories illustrate that love is essential, but not for the faint of heart.

Jan Cherubin has an MFA in fiction from Bennington College and is the recipient of several writing fellowships. Her journalism has appeared in many periodicals; Cherubin also does standup comedy in Los Angeles. The Orphan’s Daughter is her first novel.

Ellen Prentiss Campbell's Known By Heart: Collected Stories, was published May 1 by Apprentice House Press, Loyola University, Baltimore. Her debut novel, The Bowl with Gold Seams (2016, Apprentice House Press) received the Indy Excellence Award for Historical Fiction; Contents Under Pressure: Collected Stories (2016) was nominated for The National Book Award. A Fellow of The Virginia Center for Creative Arts, Ellen received her MFA from The Bennington Writing Seminars. Ellen grew up and raised her own family in Maryland, she now lives in Washington D.C. For many years she has summered in Bedford County, Pennsylvania where many stories and her novel are set. Ellen practiced psychotherapy; she now writes full time and is at work on a novel. A contributing editor of The Fiction Writers Review she also reviews and blogs for The Washington Independent Review of Books. Please see her website www.ellenprentiss.net for information, links to essays and book reviews.